Need a minister cut from a different cloth? 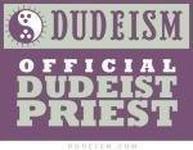 I'm ordained as an official Dudeist Priest through the Church of the Latter Day Dude (the slowest-growing religion in the world). Yes, it's a bona fide religion, and if you want to learn more, check out their official website, Dudeism.com.

I know what you must be thinking. “A religion based on a Coen Brothers film?” I would have thought the same thing until about two years ago when my cube mate called me over to his monitor and said, “I’ve found the perfect religion for you”. He had come across a web site called dudeism.com. I’d seen the movie years earlier and frankly identified more with the Donny character than I did with The Dude, but as I read through the site I realized that many of the beliefs being represented there were the same spiritual values I had found to be true for me. After thinking about it for a while, I decided that as crazy as this may sound, it isn’t any less rational than basing a religion on the writings of a science fiction author or an all powerful being that lives on a planet named Kolob or even a virgin birth, for that matter. My hope is that you will find that this spiritual practice “really pulls the room together” as I have or at least get laugh out of it.

Here’s a short description of Dudeism as explained in The Dudespaper, the official online newspaper of Dudeism.

“Dudeism is a belief system that teaches us that the universe wants us to take it easy. Getting all worked up over nothing goes profoundly against the laws of nature, psychology, sociology, bowling and several tropical countries. It’s about finding ways to maintain peace of mind in a world with too many ins-and-outs and strands to keep in your head. And it’s about finding ways to keep your heart light when the bastards are trying to get you down. It’s basically Taoism meets The Big Lebowski, plus a big scoop of Humanism and a sprinkling of Buddhism.”

I'm happy and honored to perform your wedding or other meaningful ceremonies. Talk to me about bookings.

One Old Dude's Guide to Growing Up Gracefully